REPUBLIC OF THE PHILIPPINES
DEPARTMENT OF AGRICULTURE

Bureau of Agriculture and Fisheries Standards

July 07, 2021 – The Bureau of Agriculture and Fisheries Standards (BAFS) of the Department of Agriculture (DA) led by Director Myer G. Mula conducted the focused group orientation (FGO) on the Participatory Guarantee System (PGS) at Lipa Agricultural Research and Experiment Station (LARES) in Lipa City on July 06, 2021.

During his opening message, Director Mula pointed out that the implementation of RA 11511, particularly its regulatory provisions on PGS, needs a clear and strong collaboration mechanism among the implementing agencies of the Department. More so, a clear delineation of functions among the Bureau, the DA-RFOs, and the regulatory agencies of the DA. RED Dimaculangan added that the orientation is a good opportunity for all personnel of DA CALABARZON to be updated with the current priorities of the Department, such as the PGS under the Organic Agriculture Program.

The BAFS Team presented the overview of RA 11511 and its salient provisions pertaining to the PGS, and the BAFS’ certification and accreditation process of core PGS groups that intend to operate and apply as organic certifying bodies (OCBs). The roll-out of activities relative to the implementation of PGS for FY 2021 was also presented.

After the presentations, the BAFS Team and the participants from the DA CALABARZON had a thorough discussion to clarify the criteria and requirements for the certification and accreditation of core PGS groups, the role of the Regulatory Divisions of the DA-RFOS based on the recently issued Department Order No. 04, Series of 2021 (Institutionalizing Collaboration between the BAFS and DA-RFOs) vis-a-vis the provisions of RA 11511, and the mechanism to ensure the impartiality of the certification procedure of the PGS groups.

Director Mula also highlighted that while the Implementing Rules and Regulations (IRR) of the RA 11511 and the guidelines are yet to take effect, parallel activities such as capability building activities for the identified priority groups can be initiated by the DA-RFOs in preparation for the full implementation of PGS. RTD Arpia emphasized that apart from the Regional Organic Agriculture Program and the Regulatory Division, other operating units of DA CALABARZON are also involved in the implementation of RA 11511. He pointed out the role of the Agribusiness and Marketing Assistance Division (AMAD) in facilitating the market and promotion of organic produce and products.

In her closing message, Ms. Dimapilis reiterated that all operating units of the DA CALABARZON have a role to play and the cooperation among them is significant to ensure the smooth implementation of PGS in the region. 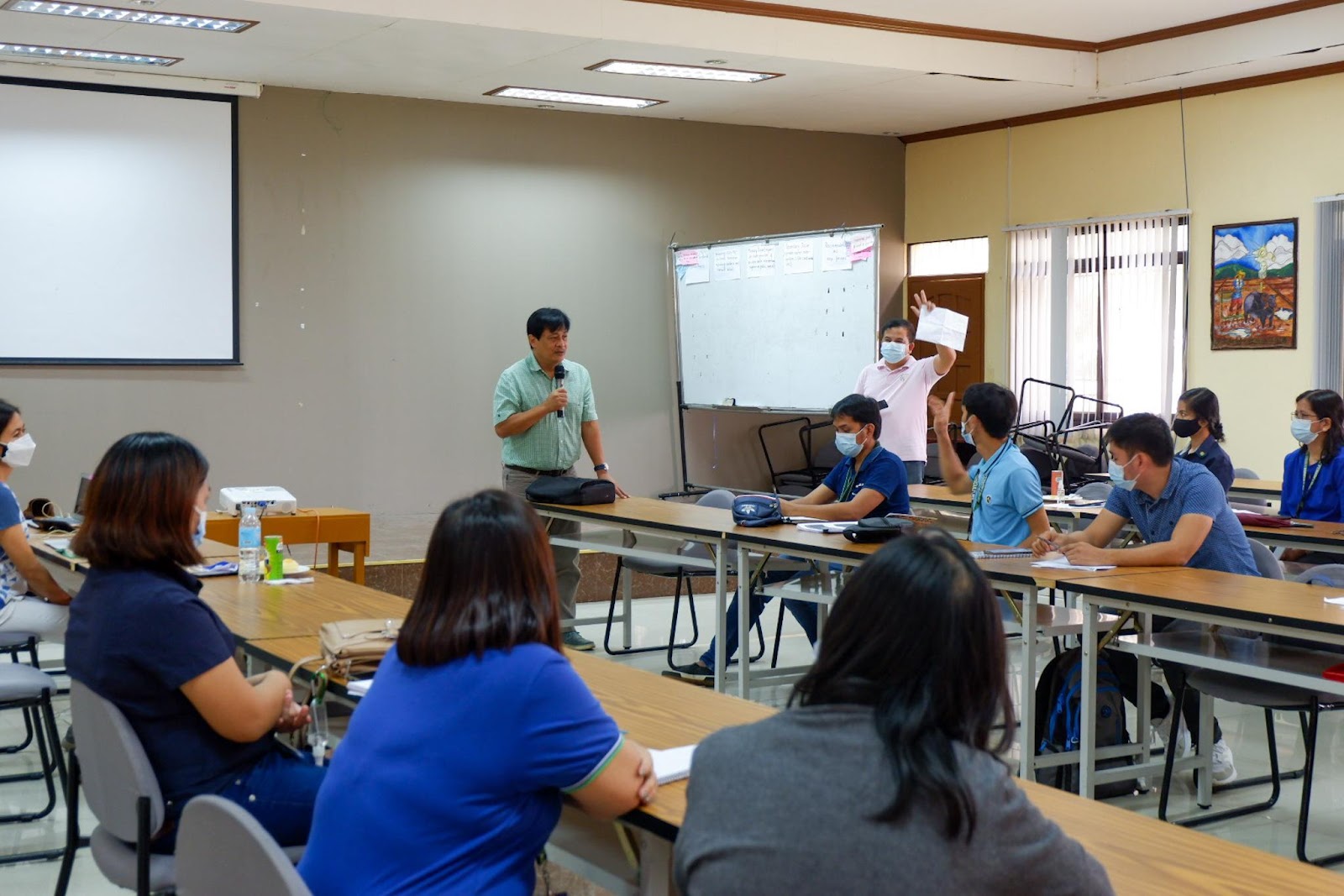 Director Mula formally opened the Focused Group Orientation on PGS held in DA CALABARZON on July 06, 2021. In his opening message, he briefly discussed the objectives of the activity to set the expectations of the participants. 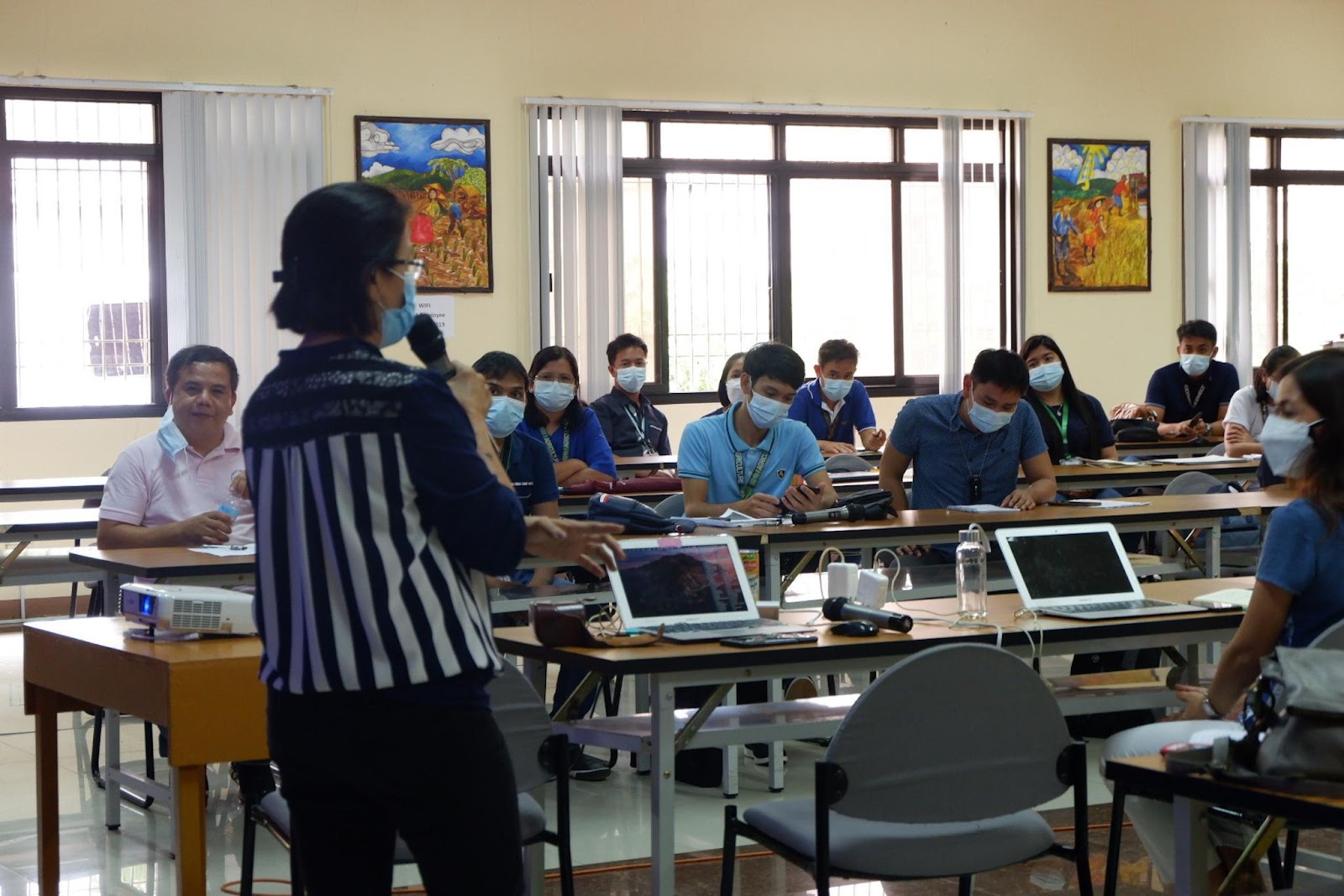 During her welcome message, RED Dimaculangan encouraged all the personnel of DA CALABARZON to become well-versed in all the programs of the DA. 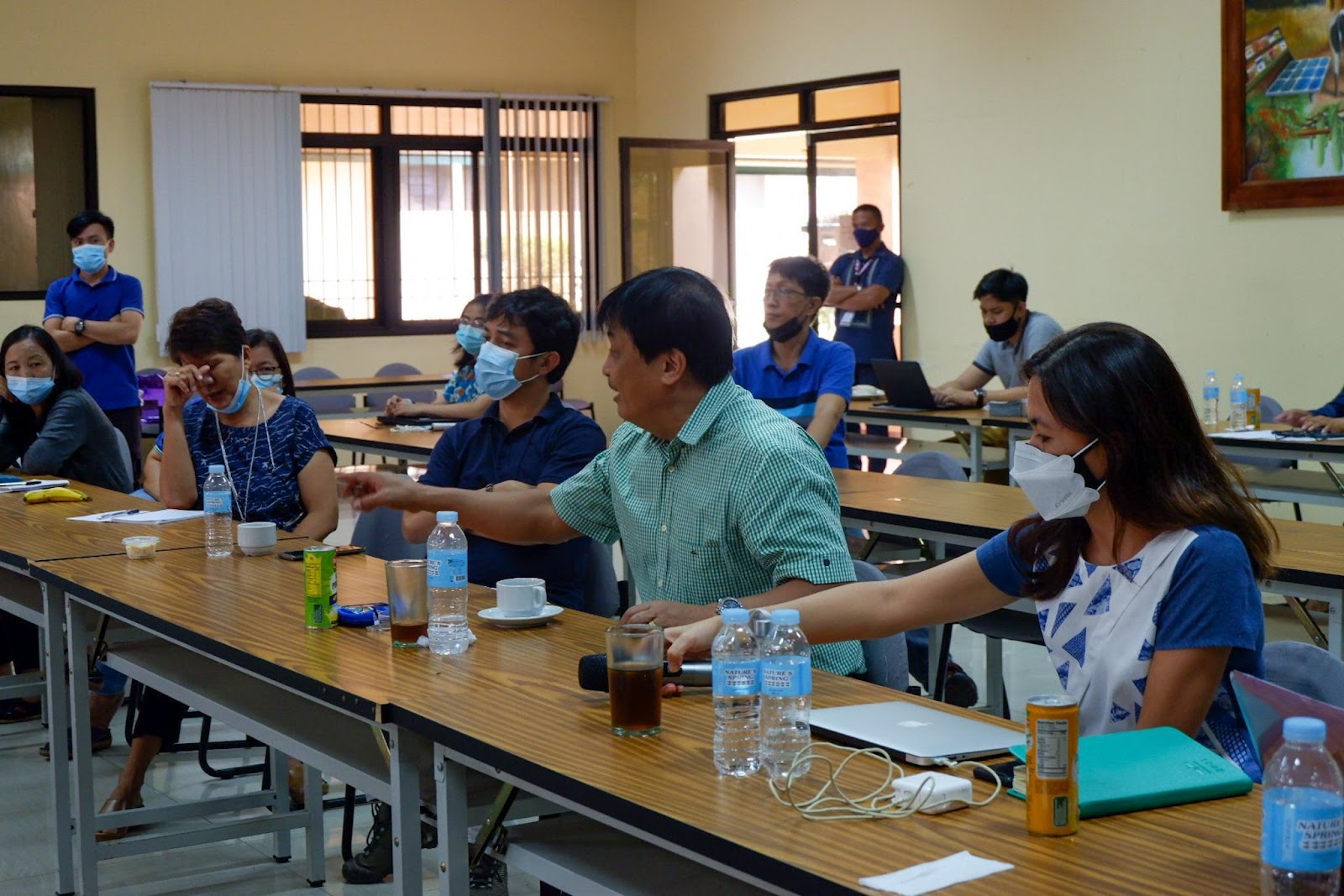 Director Mula and Ms. Calleja responded to the query on the roles of the Regulatory Divisions of the DA-RFOs in the implementation of PGS. 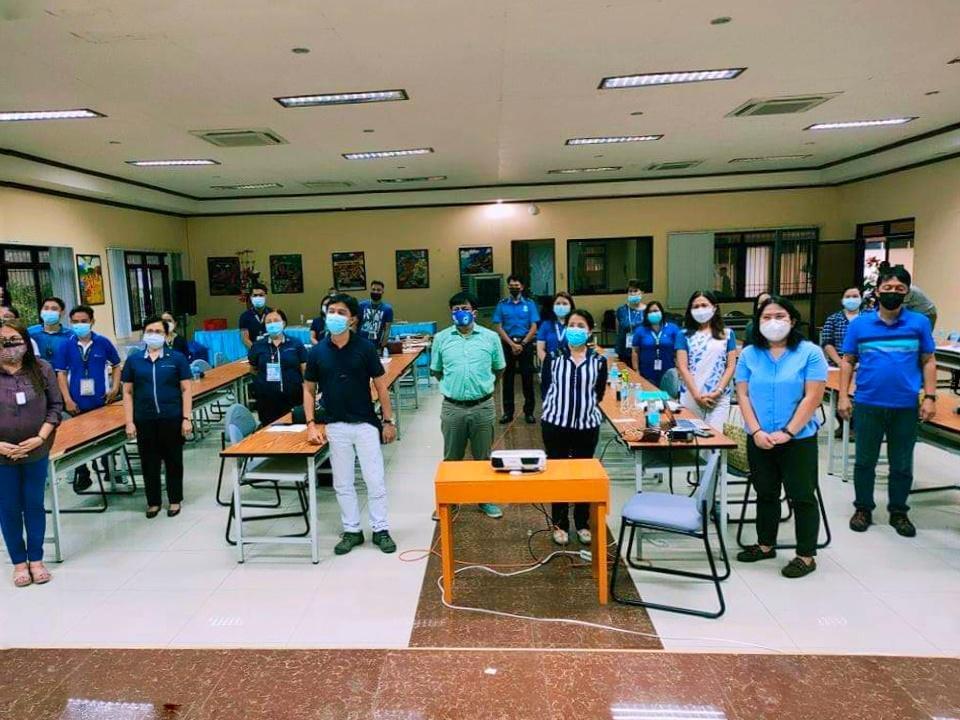 Group photo of the participants during the Focused Group Orientation on PGS held at Lipa Agricultural Research and Experiment Station (LARES) in Lipa City on July 06, 2021. © Arnaldo Gonzales, DA CALABARZON.

Cassava and its many uses...

One man’s refuse is another man’s food...

Do you know that the Philippines produces tuna for sashimi?...

Giving attention to the Black Soldier Fly as a protein sourc...

GAP Onion, G-Onion: A comic series for PNS Code of GAP for O...

Explanatory Manual on GAHP Swine Issued to Help the Industry...

Bringing back the zest in calamansi: BAFS promotes standards...

BAFS reminds the importance of food safety in urban gardenin...

Partial results show 75% of PNS adopted as the basis of tech...

Illustrative guide to equip producers with knowledge on qual...

BAFS explores collaboration with the UP – Philippine Risk ...

BAFS capacitates its partner regulatory agencies for the imp...

BAFS and the DA RFO aims for a more effective partnership an...

Initial Stakeholder Consultation for the Amendment of Philip...

PH Formally Opened the 4th Workshop for the Development of M...

Final Stakeholder Consultation for the Development of PNS on...

BAFS continues the series of FGO on PGS in Western Visayas...

Training of Researchers for the Conduct of Organic Biocontro...

TradeNet: Applications for Import and Export Permits for Org...

Final Stakeholder Consultation for the amendment of the Code...

BAFS collaborates with DA-Regional Field Office 8 on the Imp...

BAFS gathers field data for PNS on the Grading and Classific...

BAFS continues the Focused Group Orientation on PGS in DA-RF...

BAFS conducts Stakeholder Consultation for the amendment of ...

Policy on Establishing a Sustainable and Effective BSS&S Sys...

Collaboration of BAFS and DA-RFOs on Standards Development, ...

The 3rd issue of Pamantayan is here!...

Yun Palayun! - A comic series featuring the Code of GAP for ...

BAFS and the Municipality of Bayambang, Pangasinan Now Conne...

BAFS CONDUCTS FINAL CONSULTATION FOR THE AMENDMENT OF PHILIP...

Final Stakeholders Consultation for the Development of PNS P...

Final Stakeholder Consultation for the Amendment of Philippi...

Field data gathering for the Revision of Philippine National...

BAFS Explores 2 Projects with Development Academy of the Phi...

Final Stakeholder Consultation (SC) for the Amendment of Phi...

Regional Consultation for the Institutionalization of BAFS a...

BAFS conducts the webinar “I Bet Nutritious, I Bet Delicio...

2nd Stakeholders Consultation (SC) for the Development of th...

Orientation Seminar for the Technical Working Group (TWG) Me...

Initial Stakeholders Consultation for the Development of the...

Use of Standards for an “Improved Normal” Towards Safe a...

The Interrelationship of BAFS Divisions...

Where we are: Status of Philippine National Standards (PNS) ...

DA-BAFS chaired the Development of the ASEAN Mutual Recognit...

How Important is DA-BAFS in Developing Standards?...

Inception meeting on the development of the Philippine Natio...

After 9 years as NOAB Secretariat, BAFS turned over to NOAP-...

2021 Declared as the International Year of Fruits and Vegeta...

BAFS supports the campaign to end the violence against women...

BAFS spearheads FDG for the development of PNS for Cage-free...

PNS for Food Crops: A Progressive Approach to Food Safety...

DA-BAFS and its role on the agricultural and fisheries mecha...

Development of Philippine National Standards as an aid to pr...

BAFS sets up its Monitoring and Evaluation system ...

Vawal yan Dito! A Seminar on Violence Against Women...

Online Stakeholders Consultative Meeting for the Revision of...

BAFS celebrates its 22nd anniversary with the theme: "Walan...

Please tune for the conduct of 3 part series with Theme "Lea...

Standards Development Division will be conducting a series o...

PAMANTAYAN is the official newsletter published by the BAFS...

Online Public Consultation for the Adoption on the Establish...

Online Activities of the Standard Development Division for t...